Leprosy has afflicted humanity since time immemorial. It once affected every continent and it has left behind a terrifying image in history and human memory – of mutilation, rejection and exclusion from society. It has struck fear into human beings for thousands of years and was well recognised in the oldest civilisations. The damage caused by its chronic course of incurable disfigurement and physical disabilities can never be calculated. It is estimated that there are between one and two million people in the world visibly and irreversibly disabled due to past and present leprosy who require being cared for by the community in which they live. Take a look at the book of ra demo.
Diagnosis of leprosy is most commonly based on the clinical signs and symptoms. These are easy to observe and elicit by any health worker after a short period of training. In practice, most often persons with such complaints report on their own to the health centre. Only in rare instances is there a need to use laboratory and other investigations to confirm a diagnosis of leprosy.

An individual should be regarded as having leprosy if he or she shows ONE of the following cardinal signs:

skin patches and with definite sensory loss
positive skin smears
The skin patches can be single or multiple, usually less pigmented than the surrounding normal skin. Sometimes the lesion is reddish or copper-coloured. A variety of skin lesions may be seen but macules (flat), papules (raised), or nodules are common. The skin lesion may show loss of sensation to pin pick and/or light touch. Total sensory loss or anaesthetic to feeling is a typical feature of leprosy.

Thickened nerves, mainly peripheral nerve trunks constitute another feature of leprosy. A thickened nerve is often accompanied by other signs as a result of damage to the nerve. These may be a loss of sensation in the skin and weakness of muscles supplied by the affected nerve. In the absence of these signs, nerve thickening by itself, without sensory loss and/or muscle weakness is often not a reliable sign of leprosy.

Leprosy is a chronic infectious disease caused by Mycobacterium Leprae, an acid-fast, bacillus. The disease mainly affects the skin, the peripheral nerves, wet skin inside the nostril and also the eyes. 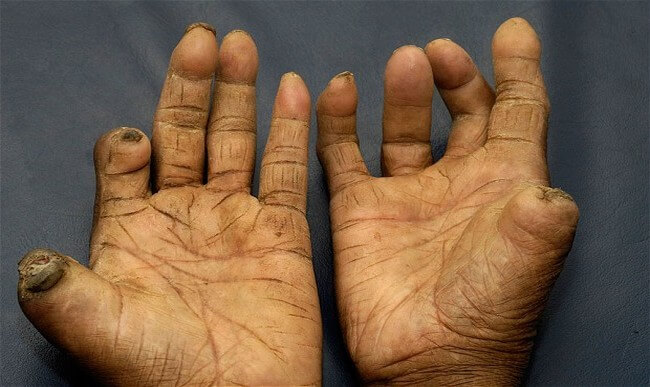